There are several factors that influence pressure range selection. The following excerpt from ASME B40.100 explains along what portion of the scale the gauge should typically operate. 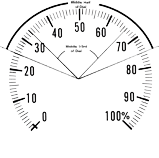 Should it be necessary for the operating pressure to exceed 75% of full scale, contact the supplier for recommendations.

This does not apply to test, retarded, or suppressed scale gauges.

Bourdon tube pressure gauges are designed and built to operate primarily in the middle third of the scale range so that when the gauge is mounted in a vertical and upright position, the pointer will be as close as possible to the 12 o’clock position when reading pressure at normal operating conditions.

Although the gauge will operate full scale, there are other considerations to take into account. If the gauge is primarily operating at the bottom of the scale (near zero), the accuracy or readability would be improved by using a more appropriately applied lower range pressure gauge. (SEE ASME B40.1-2005) If, on the other hand, the gauge is operating at the top of the scale (near the maximum pressure range of the gauge), the life span of the gauge may be decreased, particularly if the gauge encounters high cycling, temperature extremes and/or excessive vibration.

To choose the best range for your application, the follow factors must be considered:

See ASME B40.1 for additional details.